Matthew Upson works as a co-commentator and studio analyst for the BBC, Five Live and the Premier League channel. He is also a public speaker who delivers a keynote speech about his career and team building. 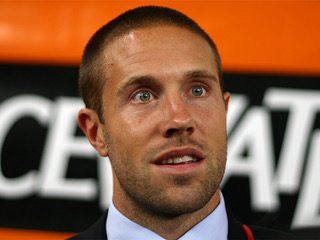 He is a former England footballer who represented his country at the 2010 World Cup and who played for Arsenal, West Ham, Birmingham, Brighton and Stoke.

He started his career with Luton Town before he joined Premier League club Arsenal for a fee of £2 million in May 1997. He struggled to force his way into the first team at Highbury making 57 appearances in 6 seasons and so spent time on loan at Nottingham Forest, Crystal Palace and Reading.

Matt joined Birmingham City in 2003 however following Birmingham’s relegation in 2006 he went on to join West Ham United for £7.5 million in January 2007. He was made captain in 2009 but at the end of the 2010–11 season West Ham were relegated to the Championship so Matt signed a two-year contract with Stoke City in August 2011. He went to on have a spell with Brighton & Hove Albion, Leicester City and MK Dons before retiring to focus on his coaching and media career.